What’s At Stake In Week 17 Of The NFL Season 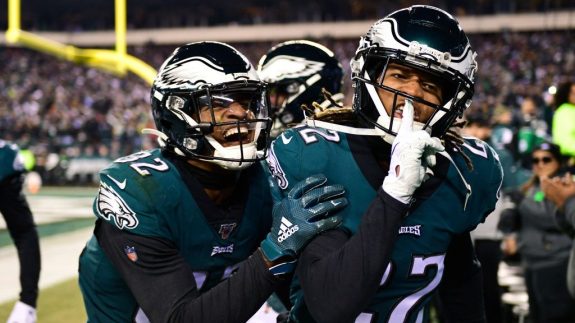 The NFL’s regular season is almost over, and (sadly?) there isn’t much real chaos potential for Week 17: Ten of 12 available playoff spots are already clinched, and we already know six of the eight division winners. But there are seven teams whose postseason and/or division fates have yet to be sealed, along with other seeding concerns on the line as the regular season concludes. So let’s run down the Week 17 situations that need to happen for those seven teams to make the playoffs or win their division.

Philadelphia Eagles: 75 percent chance to make the playoffs. This one is relatively simple: The Eagles will make the playoffs if they beat the Giants at the Meadowlands — which has a 70 percent chance of happening, per the FiveThirtyEight model. New York QB Daniel Jones had a great game against Washington in his first start after returning from an ankle injury, and the Giants certainly have the potential to pull off the upset if he stays hot, but oft-maligned Eagles passer Carson Wentz has been heating up of late as well. And Philly has a backup plan even if it loses here: It can also make the playoffs if the Cowboys lose or tie.

Dallas Cowboys: 25 percent. The Cowboys wasted a chance to clinch the NFC East last week against the Eagles, and now they no longer control their own destiny. In Week 17, they first need to beat Washington (and backup Case Keenum) at home, which our model gives an 82 percent chance of happening. That’s the good news for the Cowboys. But Dallas also needs Philadelphia to lose at the same time against New York. (Even an Eagles tie would clinch Philly’s playoff slot.) So Cowboys fans will need to second-screen the Giants game Sunday afternoon and root hard for the G-Men — the kind of hilariously unexpected Week 17 bedfellows you always love to see.

The Niners and Seahawks both clinched the postseason weeks ago, but there’s still plenty to play for when San Francisco visits Seattle on Sunday. First of all, this is the best pure matchup of the week, according to the Elo ratings of both teams. Also, the winner will take the NFC West crown and potentially claim a first-round bye (or the No. 1 overall NFC seed), depending on what else happens around the league.

Our model gives San Francisco the division edge (55 percent) because it thinks the Niners are the better team — sorry, we’re still skeptical about Seattle’s weaker point differential. Plus, the 49ers can also clinch the division with a tie; Seattle must win outright to match the Niners’ record, whereupon they will grab the division on a head-to-head tiebreaker. The model thinks the 49ers have the inside track at a bye (55 percent) as well because all they need is a win. The Seahawks must win and the Packers must lose to the 3-11-1 Detroit Lions (a 15 percent proposition) in order to secure Seattle the bye.

Tennessee Titans: 62 percent chance to make the playoffs. Over in the AFC, the Titans have the best chance to get the last playoff slot up for grabs. All Tennessee needs to do is beat the Houston Texans, who are playing at home but might end up resting QB Deshaun Watson in a game in which their postseason seed will be locked in by kickoff.<a class="espn-footnote-link" data-footnote-id="1" href="https://fivethirtyeight.com/features/whats-at-stake-in-week-17-of-the-nfl-season/#fn-1" data-footnote-content="

Whether Houston is the No. 3 or No. 4 seed depends entirely on whether the Chiefs beat the Chargers earlier on Sunday.

“>1 (On the one hand, Texans coach Bill O’Brien says he’s not resting his starters; on the other hand, Watson has been a limited practice participant this week, so we’ll see.) For now, we give Tennessee a 47 percent chance of beating Houston. The Titans can also make the playoffs if Pittsburgh loses to Baltimore (71 percent, even with Robert Griffin III starting for the Ravens) and either Tennessee ties Houston or Indianapolis loses to or ties Jacksonville (39 percent). That combination of events is enough to add up to a solid 62 percent playoff chance for Ryan Tannehill and the surprising Titans.

Pittsburgh Steelers: 31 percent. The Steelers’ path was made very difficult by losses against the Buffalo Bills and New York Jets over the past two weeks, plus an injury to QB Mason Rudolph — who himself isn’t very good but is better than stand-in Duck Hodges per our ratings. Now Pittsburgh must win at Baltimore (which has only a 29 percent probability even with the Ravens resting Lamar Jackson) and Tennessee must lose at Houston (53 percent) … or, if the Steelers lose, then Tennessee, Jacksonville and Oakland must also lose. (Or! Oakland can win, but then the Dolphins must beat the Patriots, the Chiefs must beat the Chargers, the Packers must beat the Lions and the Vikings must beat the Bears — all thanks to the NFL’s incredibly arcane strength-of-victory tie-breaker.) It’s not an impossible combination of outcomes,<a class="espn-footnote-link" data-footnote-id="2" href="https://fivethirtyeight.com/features/whats-at-stake-in-week-17-of-the-nfl-season/#fn-2" data-footnote-content="

“>2 but it’s much less straightforward than Mike Tomlin and crew must have been hoping for.

Oakland Raiders: 7 percent. The Raiders entered Week 16 with less than a 1 percent chance to make the playoffs, and they needed five different games to go a specific way<a class="espn-footnote-link" data-footnote-id="3" href="https://fivethirtyeight.com/features/whats-at-stake-in-week-17-of-the-nfl-season/#fn-3" data-footnote-content="

“>3 just to keep their playoff hopes alive heading into the regular season finale. Now, they “only” need five more results to fall into place:

That looks like a lot, and in one sense it definitely is — we give the scenario just a 7 percent chance of happening. But considering what a playoff long shot Oakland was two weeks ago, 7 percent actually isn’t that bad. And as we noted in our NFL chat Monday, that kind of crazy postseason parlay is quite fitting for a team set to move to Las Vegas next season.

FiveThirtyEight vs. the Readers

As a weekly tradition here at FiveThirtyEight, we look at how our Elo model did against everybody who made picks in our forecasting game. (If you entered, you can find yourself on our leaderboard here.) These are the games in which Elo made its best — and worst — predictions against the field last week:

After being blown out by the Elo algorithm for most weeks of the 2019 season’s second half, the readers kept things close in Week 15 and maintained that trend in Week 16 as well. Although the computer had some good picks, led by calling Philly’s win over the Cowboys, the readers also had some nice calls of their own. They rightly picked Houston to beat Tampa, for instance, and they were lower on the Vikings and Chargers than Elo was before each team lost. Still, the algorithm won the week by an average margin of 14.1 points, notching its 12th straight win over the field and bringing its record to 14-2 on the season.

Congratulations are in order, though, to Jo Benincasa, who led all identified readers in Week 16 with 146.0 points, and to Aaron DiGenova, who continues to lead the full-season contest with 1,051.9 points. Thanks to everyone who played — and if you haven’t, be sure to get in on the action! You can make picks now and try your luck against Elo, even if you missed Week 16.

Check out our latest NFL predictions.

An eastern Kentucky lawmaker has proposed a bill to legalize the recreational use of marijuana and dedicate tax revenues from the industry to the state’s cash-strapped pension systems.

The proposal is a long-shot in the Republican-dominated Kentucky legislature, but Democratic Rep. Cluster Howard of Jackson says that citizens are more receptive to marijuana than they have been in the past.

“I think that a lot of people make this a moral issue. To me, we know as a society that times have changed. People are more apt to accept legalization of the product,” Howard said.

The bill would allow the state to regulate marijuana growers, processors, testers and retailers. It would also decriminalize possession of less than an ounce of marijuana and expunge the criminal records of those with marijuana-related misdemeanors.

Howard predicted the bill could bring in more than $200 million per year in tax revenue. The bill would dedicate revenues to the state’s struggling pension systems, which are short about $37 billion.

Howard said he doubts the bill will get a hearing in the Republican-dominated legislature, but encouraged citizens to call their lawmakers about the issue.

“I think it depends on how much people actually call their reps and their senators and insist that it be heard. I do think that the chance of the bill being heard is much greater this session than it was last session,” Howard said.

A medical marijuana bill passed out of a Kentucky legislative committee earlier this year, but never received a vote in the house. The bill would have not allowed patients to smoke marijuana.

Adult marijuana use will be legal in Kentucky’s northwestern neighbor Illinois starting on Jan 1, 2020. Officials there predict it will bring in about $375 million a year in tax revenue and create a path to clear 700,000 low-level marijuana convictions.

A brief introduction to using data sources like Google Analytics and Adwords within Data Studio and how the combined insights can improve a PPC campaign.